The Man Who Was Thursday

Set in Edwardian London, this genre-stretching interpretation of a novel follows Gabriel Syme, an employee of Scotland Yard, as he infiltrates a secretive anarchist cell.

The world he discovers has a cast mysteriously named after days of the week, and is teeming with artifice, ideology, and uncertainty – not to mention a whole lot of humour.

The question is: will he get out alive?

Famed as the ‘prince of paradox’ in the early 20th century, G. K. Chesterton once remarked that his friend George Bernard Shaw looked like he was living in a famine, to which Shaw responded, ‘To look at you, anyone would think you had caused it.’

It was one of those quite arbitrary emotions, like jumping off a cliff or falling in love. G. K. Chesterton. The Man Who Was Thursday

Working on barscene for graphic novel 'The Man who was Thursday'. pic.twitter.com/XKYEE0phZz

Any of you who have not read The Man Who Was Thursday should amend your life right now. Silly profundity and wise jokes. Glorious novel. 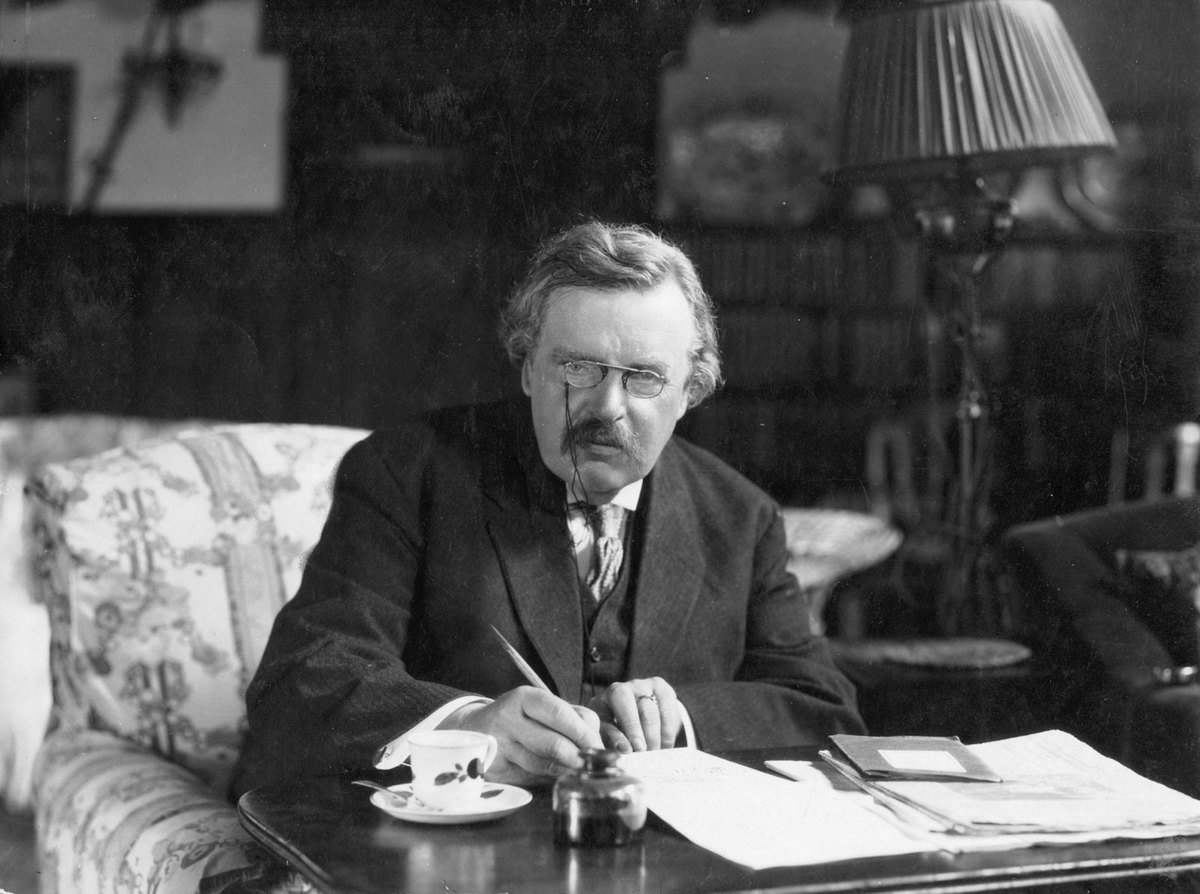 On May 29, 1874, G. K. Chesterton was born in London. His father, gifted in many lines of amateur creativity, exerted no pressure on the boy to distinguish himself in either scholarship or athletics. Gilbert was a day boy at St. Paul’s. The masters rated him as an under-achiever, but he earned some recognition as a writer and debater. From St. Paul’s, he went to the Slade School of Art, where he became a proficient draftsman and caricaturist; later he took courses in English literature at City College.

From art, Chesterton drifted into journalism. He was vitally concerned with the injustices of Great Britain to its dependencies. He progressed from newspaper to public debate. He used logic, laughter, paradox, and his own winning personality, to show that imperialism was destroying English patriotism. In 1900 he published his first literary works, two volumes of poetry.

In 1900 he met Hilaire Belloc, and in 1901 he married Frances Blogg; these two people were to be the great influences in his life. From 1904 to 1936 Chesterton published nearly a dozen novels, the most important being The Napoleon of Notting Hill (1904) and The Man Who Was Thursday (1908). In 1911 Chesterton created the Father Brown detective stories. During his literary career, he published 90 books and numerous articles, and he poured out a wealth of lighthearted essays, historical sketches and metaphysical and polemical works, together with such well-known poems as

‘The Ballad of the White Horse’, ‘Lepanto’ and the drinking songs from The Flying Inn. Among his major critical works are studies of Robert Browning (1903) and Charles Dickens (1906). Prodigiously talented, Chesterton also illustrated a number of Belloc’s light works.

Chesterton’s overriding concern with political and social injustice is reflected in Heretics (1905) and Orthodoxy (1909), perhaps his most important work.

Throughout his life, Chesterton was one of the most colourful and loved personalities of literary England. To his intellectual gifts he added gaiety, wit and warm humanity that endeared him to all. Shortly after his marriage he had purchased a home in Beaconsfield, where he died on 14 June 1936.