From the literary great Sir Arthur Conan Doyle comes this fantastical search for prehistoric creatures in the heart of the Amazon.

In a complete departure from Sherlock and Watson, The Lost World follows Professor Challenger, an eccentric paleontologist, and his intrepid troupe on their expedition into an Amazonian basin where dinosaurs still survive. When their bridge to civilization collapses, the explorers find themselves marooned among prehistoric animals and a race of 'ape-men'.

This suspense-filled classic is the ultimate adventure, abounding with dangerous crises, exotic locations, terrifying beasts and the occasional damsel in distress.

Best known as the creator of Sherlock Holmes, Arthur Conan Doyle had a varied career as a writer, journalist and public figure. He was also renowned for being a spiritualist and endorsing prevalent 'evidence' of psychic phenomena.

I think my favorite thing is when book characters talk about the events of the story being unrealistic. #amreading #thelostworld #doyle pic.twitter.com/gheU797tzk

"I say - what the dooce are we to do with these people? Get up, little chappie, and take your face off my boots.' #thelostworld #doyle 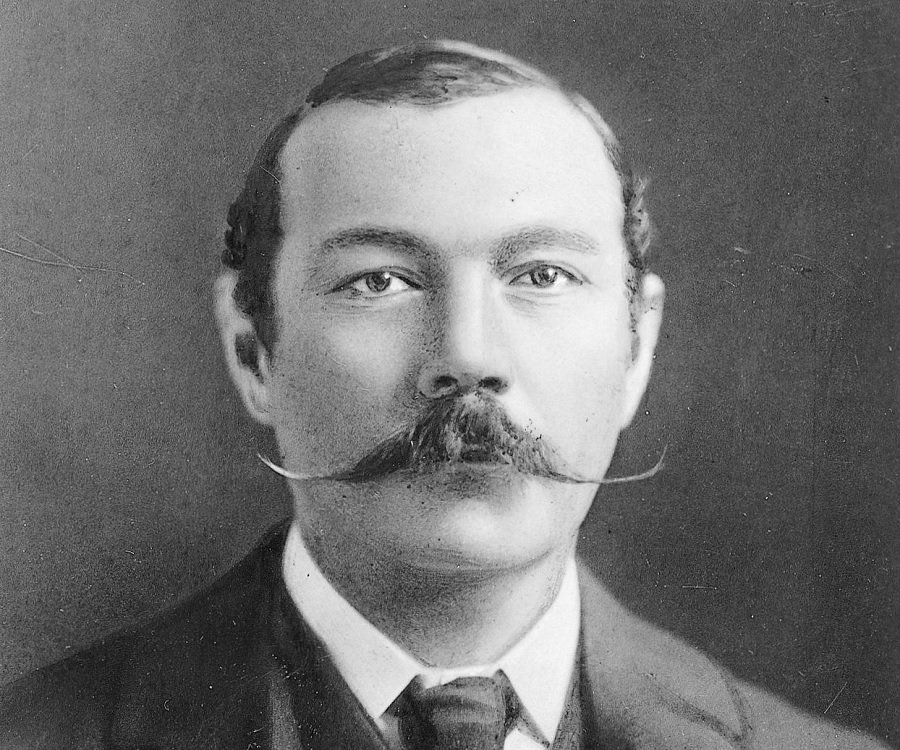 On 22 May 1859, Arthur Conan Doyle was born to an affluent, strict Irish-Catholic family in Edinburgh, Scotland. Although Doyle’s family was well-respected in the art world, his father, Charles, who was a lifelong alcoholic, had few accomplishments to speak of. Doyle's mother, Mary, was a lively and well-educated woman who loved to read. As Doyle would later recall in his biography, ‘In my early childhood, as far as I can remember anything at all, the vivid stories she would tell me stand out so clearly that they obscure the real facts of my life.’

At the age of 9, Doyle was shipped off to England, where he would attend Hodder Place, Stonyhurst – a Jesuit preparatory school – from 1868 to 1870, and then Stonyhurst College for the next five years. For Doyle, the boarding-school experience was brutal: many of his classmates bullied him, and the school practiced ruthless corporal punishment against its students. Over time, Doyle found solace in his flair for storytelling, and developed an eager audience of younger students.

Later, at medical school, Doyle met his mentor, Professor Dr. Joseph Bell, whose keen powers of observation would later inspire Doyle to create his famed fictional detective character, Sherlock Holmes. At the University of Edinburgh, Doyle also had the good fortune to meet classmates and future fellow authors James Barrie and Robert Louis Stevenson. While a medical student, Doyle took his own first stab at writing, with a short story called ‘The Mystery of Sasassa Valley’.

During Doyle’s third year of medical school, he took a ship surgeon’s post on a whaling ship sailing for the Arctic Circle. The voyage awakened Doyle’s sense of adventure, a feeling that he incorporated into a story, Captain of the Pole Star.

Doyle's first paying job as a doctor took the form of a medical officer's position aboard the steamship Mayumba, travelling from Liverpool to Africa. After his stint on the Mayumba, Doyle settled in Plymouth for a time. When his funds were nearly tapped out, he relocated to Portsmouth and opened his first practice. He spent the next few years struggling to balance his burgeoning medical career with his efforts to gain recognition as an author. Doyle would later give up medicine altogether in order to devote all of his attention to his writing and his faith.

In 1885, while still struggling to make it as a writer, Doyle met and married his first wife, Louisa Hawkins. The couple moved to Upper Wimpole Street and had two children, a daughter and a son. In 1893, Louisa was diagnosed with tuberculosis. While Louisa was ailing, Doyle developed an affection for a young woman named Jean Leckie. Louisa ultimately died of tuberculosis in Doyle's arms, in 1906. The following year, Doyle married to Jean Leckie, with whom he would have two sons and a daughter.

In 1886, newly married and still struggling to make it as an author, Doyle started writing the mystery novel A Tangled Skein. Two years later, the novel was renamed A Study in Scarlet and published in Beeton’s Christmas Annual. A Study in Scarlet, which first introduced the wildly popular characters Detective Sherlock Holmes and his assistant, Watson, finally earned Doyle the recognition he had so desired. In 1893, to Doyle’s readers’ disdain, he  attempted to kill off his Sherlock Holmes character in order to focus more on writing about Spiritualism. In 1901, however, Doyle reintroduced Sherlock Holmes in The Hound of Baskervilles and later brought him back to life in The Adventure of the Empty House so the lucrative character could earn Doyle the money to fund his missionary work.

In addition, Conan Doyle wrote a number of other novels, including The Lost World and various non-fictional works. The Lost World was originally published serially in the popular Strand Magazine and illustrated by New-Zealand-born artist Harry Rountree during the months of April–November 1912.

The book will be delivered in 16 instalments (or staves), one every day. The instalments are delivered to your Pigeonhole bookshelf on your IOS or Android app, plus you can read on our web reader. You will receive an email letting you know when each stave is available.