The History of Mary Prince

The second book in our #BlackHistoryMonth series was the first autobiography by a black woman to be published in Britain: this is The History of Mary Prince.

Born into slavery in Bermuda, Mary Prince endured a brutal upbringing in the British-ruled Caribbean. Early in her life she was separated, by sale, from her family and spent many years labouring – partially submerged – in corrosive salt pits.

This narrative, which she dictated once living in England, was immensely popular and pushed slavery even closer to abolition.

After 40 years of enslavement in Bermuda, Mary Prince made the journey to England where she was encouraged to record her experiences by Thomas Pringle, an abolitionist writer. Her memoir drastically intensified the nation's anti-slavery sentiment.

Waiting for a document to convert to plain text. Until then, here's a viz. of The History of Mary Prince #DHatHU pic.twitter.com/RjjirgBBsE

The 1st black woman to present an anti-slavery petition to Parliament & write & publish an autobiography, ‘The History of Mary Prince pic.twitter.com/N4lNU9WfcL 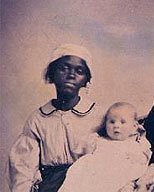 Born in 1788 in Bermuda, Mary Prince grew up enslaved and was sold at the age of ten, away from her family. She was treated cruelly by a series of masters on several West Indian islands, enduring extreme hardship and sexual abuse. For years she was forced to work up to her waist all day in ponds, manufacturing salt. This work caused sun blisters on exposed parts of the body and painful boils and sores on the legs.

In 1828, she was brought from Antigua to England by her then owners, Mr and Mrs John Wood. Slavery was still legal in the West Indies, but no longer in Britain itself, so once in London, Prince left the Woods and went to the Anti-Slavery Society.

In 1829, she unsuccessfully petitioned parliament for her freedom, so she could return to her husband in Antigua without finding herself once again enslaved. She told her life story to abolitionist sympathisers, and it was published in 1831 as The History of Mary Prince - attracting a large readership just as the anti-slavery movement was mounting a powerful and ultimately successful campaign for the emancipation of all Africans enslaved by the British.

The remainder of Mary Prince's life is a mystery. It is unknown whether she died in Britain or was able to return, free, to Antigua