Marx and Engels' Communist Manifesto was first published early in 1848, a year of political upheavals throughout Europe, and its influence continues to be felt today. A rousing summons to the working classes, it sets out a vision for a classless society without private property and predicts a proletarian revolution that will overthrow capitalism. Will this stirring text make you see red?

Prussian-born Karl Marx and Friedrich Engels co-authored The Communist Manifesto and are the founders of Marxist theory.

Sayle's top 10 books about #revolution, including #Conrad, #TheCommunistManifesto and #Orwell. Which have you read? https://t.co/MfAQlcW55B

Karl Marx is prophetic. But where did it all go wrong? #TheCommunistManifesto 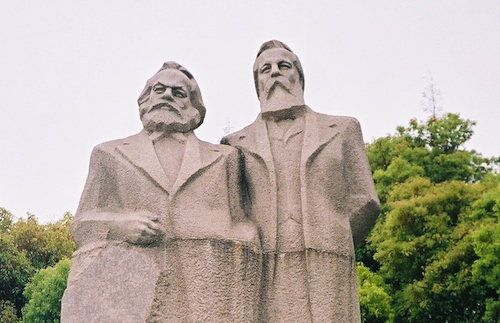 Born in 1818 as one of nine children to a Jewish Prussian family, Karl Marx – who was regarded as an average student during his school years – went on, with Engels, to shape the philosophy of communism that would influence world politics forever after. His irreverent stance towards the status quo was shaped at the Universities of Bonn, Berlin and latterly Jena. It was at Jena that he finally managed to earn his doctorate, having been something of a tearaway at Bonn, where he was frequently cited for drunkenness and was involved in a duel.
His early passion for Hegel brought him into association with a young group of radicals, which restricted his employment potential and would only cease when he was introduced, later in life, to socialism by Moses Hess in Belgium. Marx met his life-long collaborator Engels in 1844, with whom he would go on to co-author many seminal texts, including The Communist Manifesto. His professional life was a stop-start affair which included a number of spells as a journalist on various journals and newspapers, but despite his obvious talent, Marx was never able to earn a serious living from his writing, remaining heavily reliant on his friend and confidante Engels for financial support.
In amongst these lofty achievements, in 1836 a controversial engagement to Jenny von Westphalen was announced – she was his superior in age and social station. He ended his life in London as a non-citizen, having been exiled from Belgium, France and Prussia. He died in 1883 and is buried beneath a grand bust in Highgate Cemetery, North London.

Friedrich Engels, Marx’s famous collaborator, was born in 1820 as the eldest of six children, also to Prussian parents. Beyond the age of 14, Engels had no formal schooling, and was strong-armed by his father into a commercial occupation that didn’t suit him at all. After a military spell in Berlin, three years in Manchester working, yet again, in the hierarchy of a capitalist organisation, and a spell in Paris where he met Marx, Engels spent half a decade involved in various revolutionary activities across the continent.
Owing to financial necessity, Engels was forced to become a partner in his father’s firm in Manchester. He saw it as the only way he could make enough money to support both himself and Marx, who was struggling to make a living.When he was finally able to sell his share in the business in 1870, Engels moved to London, where he spent the rest of his life in the company of Marx, subsequently editing and publishing the second and third volumes of Das Kapital following his friend’s death.

We are serialising the 1888 edition of The Communist Manifesto, edited by Friedrich Engels and translated by Samuel Moore.