Since its muted publication in 1899 – when even Conrad himself was more enthusiastic about the two stories it was published alongside – Heart of Darkness has become one of the most taught texts on university and college syllabuses and has inspired one of the most critically acclaimed films of all time, Apocalypse Now. Written eight years after his own return from Africa, Conrad’s tale – narrated as reported speech by a man named Marlow – maps the journey of a ship up the River Congo in search of the missing ivory-trader Mr Kurtz.

The book’s portrayal of Africa and African people has fuelled critical debate for decades, with Chinua Achebe denouncing the book as ‘offensive and deplorable’. Despite the controversy surrounding it, Heart of Darkness remains important to post-colonial scholars and an intensely absorbing novella.

Born a Polish nobleman in Russian-occupied Ukraine, Joseph Conrad would rise to fame writing masterpieces in his  fourth language.

His work was influenced by his experiences in the French and British merchant navies, for it was only after two decades of service that he chose to dedicate himself to literature. His writing had both modernist and realist attributes and continues to influence contemporary authors, including Salman Rushdie.

fun idea: read Heart of Darkness. every time you see the word "Kurtz," "horror," "wilderness," or "ivory," take a shot.

Trying to finish reading The Road for the fourth time in-between Heart of Darkness. If I stop speaking for the coming weeks, this is why. 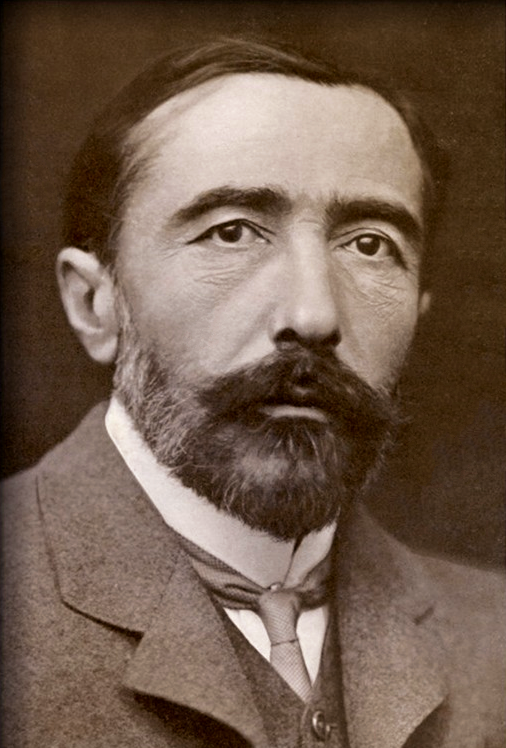 On 3 December 1857 Joseph Conrad was born in Berdychiv, a part of Ukraine that was under Russian rule.  Unfortunately for him, as part of the second generation of his family, he was forced to earn a living rather than rely on stipends from the wealth of their estate, which had previously been the tradition.
He struggled somewhat at school, despite being good at Geography, French and Romantic Polish Literature. Conrad embarked on a 19-year career at sea on French and British ships, less than half of which was actually spent on the water. He also spent three years working for a Belgian trading company, including a trip to the Congo, which would provide the basis for his novella Heart of Darkness.
It was not until 1894 that Conrad committed to becoming an author. He found himself writing about non-English colonial settings as a way of avoiding writing about an England that he was not overly familiar with. He struggled financially throughout his career, and did not find popular success until the release of his novel Chance, but by this point the intellectual circles of the time already held him in high esteem.
Throughout his life he was blighted by ill-health, which seriously affected his ability to write. He suffered from a long list of physical afflictions including malaria, gout, and neuralgia, as well as lingering depression. The last of these - in addition to financial insolvency - was responsible for a failed suicide attempt in 1878, when a bullet to his own chest failed to kill him.
In 1896 Conrad married a woman called Jessie George, a comparatively ordinary woman who gave him two sons. They spent much of their time in rented houses in the English countryside and are now buried alongside one another in Canterbury, Kent.