The Diary of a Nobody

Serialised initially as a column in Punch magazine, The Diary of a Nobody has since become a cult classic. Cataloguing the quotidian events of lower-middle-class life towards the end of the Victorian period, this light-hearted yet acutely detailed account of Mr Pooter’s existence has never been out of print – and continues to attract new audiences.

George and Weedon Grossmith, after successful careers as an actor and an artist respectively, collaborated to produce this portrait of an aspirational young family living in a modest house in Holloway, North London.

“What's the good of a home, if you are never in it?”
― George Grossmith, The Diary of a Nobody#ALDUBHomeAtLast

5 of 5 stars to The Diary of a Nobody by George Grossmith https://t.co/wXFz0LDAFK

Just referred a fellow-student to read "The Diary of a Nobody". I didn't mean it like *that*! 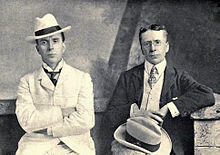 Most people would be content if they co-wrote a book that was still being read over a century after their death. But for the Grossmith brothers, The Diary of Nobody was something of an afterthought to their actual careers, which they pursued assiduously outside of their interest in literature. Born seven years apart, the brothers shared a love of the stage passed down to them by their father, also named George, who worked as a part-time entertainer. Weedon, the younger of the brothers, managed to eke out an existence as a respected – albeit poorly paid – artist, holding exhibitions at the Royal Academy and contributing illustrations to both Punch and the Art Journal. Eventually, wearied by the dismal financial returns for his art, he opted for a life on the stage, where he flourished, acting continuously for many years before turning his hand to writing plays and managing theatres. George spent his entire career performing in a mixture of guises: firstly as a comedic musician and then as a leading man in the comic operas of the day. He was regarded as one of the most successful comic performers of his generation.

The book will be delivered in instalments (or staves), one every day. The instalments are delivered to your Pigeonhole bookshelf on your IOS or Android app, plus you can read on our web reader. You will receive an email letting you know when each stave is available.