Around The World In 80 Days

One ill-fated evening at the Reform Club, Phileas Fogg rashly bets his companions £20,000 that he can travel around the entire globe in just eighty days - and he is determined not to lose.

Breaking the well-established routine of his daily life, the reserved Englishman immediately sets off for Dover, accompanied by his hot-blooded French manservant Passepartout. Travelling by train, steamship, sailing boat, sledge and even elephant, they must overcome storms, kidnappings, natural disasters, Sioux attacks and the dogged Inspector Fix of Scotland Yard - who believes that Fogg has robbed the Bank of England - to win the extraordinary wager.

Around the World in Eighty Days gripped audiences on its publication and remains hugely popular, combining exploration, adventure and a thrilling race against time.

Verne's collaboration with the publisher Pierre-Jules Hetzel led to the creation of the Voyages Extraordinaires, a widely popular series of scrupulously researched adventure novels including Journey to the Center of the Earth (1864), Twenty Thousand Leagues Under the Sea (1870), and Around the World in Eighty Days (1873). 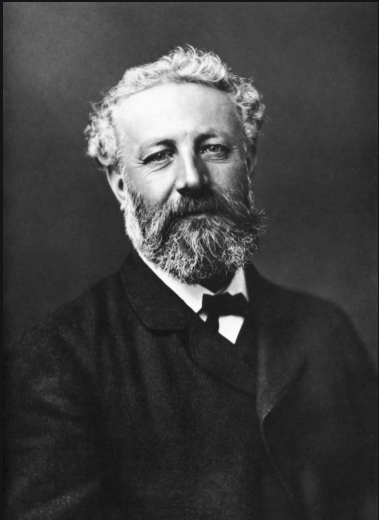 Verne is generally considered a major literary author in France and most of Europe, where he has had a wide influence on the literary avant-garde and on surrealism. His reputation is markedly different in Anglophone regions, where he has often been labelled a writer of genre fiction or children's books, largely because of the highly abridged and altered translations in which his novels have often been printed.

Verne has been the second most-translated author in the world since 1979, ranking between Agatha Christie and William Shakespeare. He has sometimes been called the "Father of Science Fiction", a title that has also been given to H. G. Wells, Mary Shelley, and Hugo Gernsback.

On 9 March 1886, as Verne was coming home, his twenty-six-year-old nephew, Gaston, shot at him twice with a pistol. The first bullet missed, but the second one entered Verne's left leg, giving him a permanent limp that could not be overcome. This incident was hushed up in the media, but Gaston spent the rest of his life in a mental asylum.

After the death of both his mother and Hetzel, Jules Verne began publishing darker works. In 1888, Verne entered politics and was elected town councillor of Amiens, where he championed several improvements and served for fifteen years.

On 24 March 1905, while ill with diabetes, Verne died at his home in Amiens, 44 Boulevard Longueville (now Boulevard Jules-Verne).

The book will be delivered in 10 instalments (or staves), one every day. The instalments are delivered to your Pigeonhole bookshelf on your IOS or Android app, plus you can read on our web reader. You will receive an email letting you know when each stave is available.