When espionage turns into global terror, only one man can stop it…

When three eminent scientists are kidnapped by a shadowy global organisation, disgraced agent Sean Richardson is called in to conduct a simple mission – to track down and rescue a whistle-blower who holds the secrets to their startling conspiracy.

After witnessing her assassination, Sean is propelled into a game of audacious espionage, determined to infiltrate a secret society and disrupt a plot that would lead to terrifying acts of war.

As Sean investigates deeper, he uncovers a powerful cabal shrouded in absolute secrecy. Far from home and surrounded by the enemy, only sabotage can stop the global carnage. But can Sean survive long enough to prevent new attacks on an unimaginable scale...?

Read More
Why We Like It
In the Discussion
#TheThirdAvenue

First draft of The Third Avenue down the range and in the bank.... pic.twitter.com/HghWZziIOI

With a fair wind, it looks like we're on track for a mid to late spring publication - really enjoying writing this one and linking it to world events of the day! pic.twitter.com/tOXBolONpA 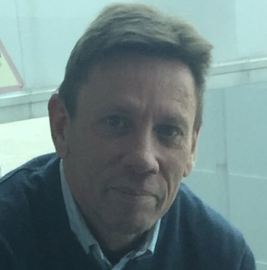 I started climbing at 13, survived being lost in Snowdonia at 14, nearly drowned at 15, and then joined the Army at 16. Risk and adventure was built into my DNA and I feel very fortunate to have served the majority of my working career as an intelligence officer within Defence Intelligence, and as an explosive ordnance disposal officer and military surveyor within the Corps of Royal Engineers.
I feel privileged to have served for twenty-eight years in the British Army as a soldier and officer, rising through the ranks to complete my service as a major. I served across the globe on numerous military operations as well as extensive travel and adventure on many major mountaineering and exploration expeditions that I led or was involved in.
I was awarded the Geographic Medal by the Royal Geographical Society for mountain exploration and served on the screening committee of the Mount Everest Foundation charity for many years. It was humbling after so many years of service when I was awarded the MBE for services to counter-terrorism in 2007
The Failsafe Query is my debut novel, and I hope you enjoy the follow up novel, The Kompromat Kill, and my third in an ongoing series, The Moscow Whisper. Each can be read as standalone novels. Each has become an Amazon kindle best seller in a variety of categories across UK, Canada and Australia.

Thank you for taking the time to read about me and my novels. I'm grateful to all my new followers and enjoy to correspond on twitter and facebook, via @FailsafeQuery or at michaeljenkins.org